Here is is 4 awesome Suv;s to look forward to after the summer!

Kia is expanding its model program this autumn with a brand new suv. Stonic should be spacious for drivers and passengers despite its small size and, above all, Kia goes deep into personalization. It is possible to order Kia Stonic in a variety of variants. Stonic becomes a competitor of the sister car Hyundai Kona. The car is likely to be shown at the Frankfurt car salon in September with sales to start in Europe during autumn. Unfortunately, Kia has at the time of this writing not released any prices, but we guess it’s just below the prices of Kia Niro.

You probably remember the hysteria around the launch of Skoda’s big suv Kodiaq. And it looks we’re gonna get the same hysteria when Skoda starts selling the slightly smaller Karoq. Sales are scheduled to start in week 37 with delivery of the first cars right before the Christmas break. These are the Skoda version of the VW Group’s medium-sized suits and the demand for VW Tiguan and Seat Ateca has shown that the suv fits normal sized families perfectly. We get a total of five engine alternatives at the start of the sale, and of course you’ll find four-wheel drive. This car is also shown in Frankfurt and Skoda can count on many pre-orders, just like with the Kodiaq. 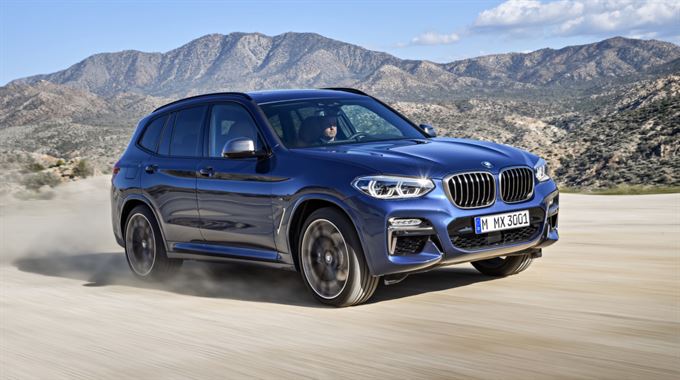 Expectations on the BMW X3 are high as the sky – not least in the United States where the model is expected to be the best-selling segment and account for BMW’s largest revenue stream. The BMW X3 will also be a tough competitor for the Volvo XC60 when it appears at the Frankfurt car dealership and then rolled out all over Europe.  We can look forward to a lighter and more rugged car filled with the technical features we’ve seen in the 7 Series and 5 Series. This is a very important launch from BMW. I think the importers has been allowed to put succulent discounted promotional prices to match Volvo’s offer on the XC60.

Volvo is facing another major product launch, as they show the all-new XC40 – the first finished build on the new CMA platform, and the first car in the brand new 40 series. I have seen an unmasked XC40 at Volvo in Torslanda (Sweden), and then the car had a very square profile and with Volvo’s characteristics. When Volvo showed the CMA platform, we also saw an almost finished XC40. Volvo needs to find cheap entry cars for Swedish car buyers and this can be exactly that car.